Oh my! To say that today was amazing would be quite the understatement.

First of all, Raudel Hernandez (our Spanish campus pastor) preached from James 1 at Summit today. He talked about temptation and sin. Here’s just a few things to think about from what he said:

The message isn’t up yet, but it should be soon. I HIGHLY encourage you to listen to it here as soon as it is. It gave me a lot to think about.

Also, I tweeted about a blog post and tagged @SummitRDU and @JDGreear in it earlier this week. J.D. AND someone on Summit staff both read the post and tweeted back at me. It’s a silly little thing, but it’s still incredibly exciting.

After church, I had a quick lunch with my grandma and a family friend, then I hurried off to the fairgrounds.

My first assignment of the day was to attend the Livestock Hall of Fame induction ceremony. I helped shoot (with a camera, not a gun) the event. There was a light reception after the ceremony, then Heather, Danette and I headed back to the press office.

My next assignment was to write a press release about the SPAM recipe competition.

When I finished that up, I took a camera to get some golden hour pictures around the fair.

I was on my way back, when I bumped into Andrea and Heather, who were on a mission to sell two extra tickets to the sold out Florida Georgia Line concert that Andrea had purchased.

We went up to Dorton Arena and successfully sold Andrea’s tickets, then we set out to try to get into the concert to get some photos for the Public Affairs Office. After some trying, we made it in, and were told that we could stay for the opening act (Larry Frick) two songs of the Florida Georgia Line show.

Shooting that concert was one of the coolest things I have EVER done in my life. We were so close– I was probably about a foot away from the stage. I’ll post some more pictures later this week. 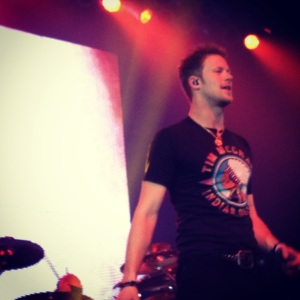 I actually didn’t eat anything at the fair, so no awesome fair foods to report on today. Never fear, though, I’m going back tomorrow and I WILL be sure come back with something to share.

That’s what I’m talking about!